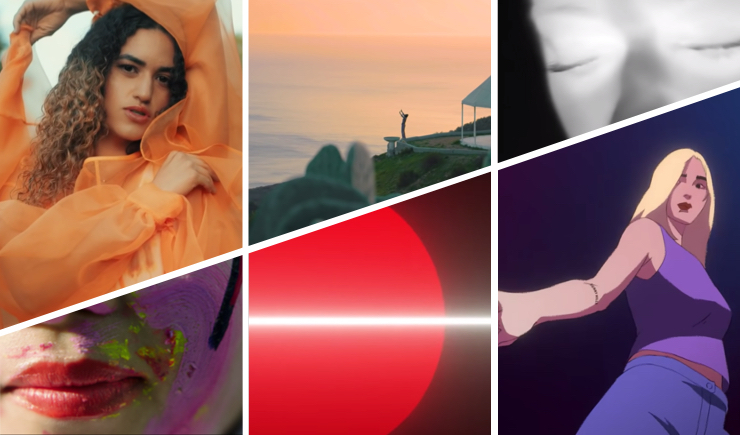 Our creativity and innovation head honcho Eoghan (the brains behind videos and animations for Madonna, Underworld, Oasis and more) counts down 20 of the most interesting, creative and innovative music videos of 2020 so far to help you cook up your own music video ideas.

Ask any creative ‘Where do you get your ideas?’ and they’ll probably tell you ‘I don’t know’. The German filmmaker Werner Herzog says that his ideas “come at him like a burglar in the night.” David Lynch (director of Twin Peaks and NiN music videos) swears by meditation to capture his ideas like “catching the big fish”.

But the truth is, there’s no such thing as an original idea. We piece our ideas together from what we ingest and find interesting. Cognitive scientists say that our ‘Eureeka!’ moments are actually the result of our brains working on an idea subconsciously for a minimum of three weeks—baking slowly until they're ‘done’.

When you’ve got music to promote and need video ideas, I say a good place to start is watching creative music videos by other artists. Here are my top 20 music videos of 2020 so far, and what's great about them, to give you a head start. Watch, enjoy, ingest, and maybe in three weeks’ time something great will emerge from your idea oven. Eureka!

Minimalism works sometimes. This 10-minute track is driven by just 10 scene set ups. It works because the content of the scenes are powerful and the track is great.

Masterful drone piloting and Four Tet’s music seems to be a match made in heaven.

Funny, simple and punky, director Hideto Hotta doesn’t have to do much with CHAI, as their deadpan performance and empowering message leads to a short and fun boppy video.

A great way to get a music video in the can quickly is to do it on location in one take, with one performer. However, with a hyper-stripped-back music video concept like this, there are no cuts, clips and effects to hide behind and distract the viewer—so getting those few featured details right really matters.

Over the past ten years, CANADA (an international collective of directors) has been one of the top creative forces in video, if not THE best. Its promos have been wildly influential. I’m always interested to see directors who've previously flourished with indie artists try their hands at mega-bucks acts—because so often they’re restricted to dance numbers and a focus on the performer. In this Dua Lipa video, there’s a lot of that, but CANADA opted to cut to some excellent punctuations of animation. Maybe not enough animation, but when it’s there, it’s awesome.

15. Take Me Away (feat. Mondo Cozmo) by Unequal

If you have these elements, you don’t need a performer—you’ve got yourself a great video...and that’s what this is.

Madison Beer gives such a vulnerable performance close up and straight to camera. Sometimes, that’s all you need.

Kevin McGloughlin’s collaborations with Max Cooper are great examples of when a visual artist and a musician strike a synergy that produces great video work. This one is no different, especially considering Cooper’s advanced 3D audio production on the track. Make sure to read the notes under the video for an explanation and why you have to listen with headphones.

12. Almost Mine by Perfect Sons

Here's an excellent example of how photography can be as abstract as painting when used inventively. Already unfamiliar environments become positively alien-like in close-up, while the editing and post-production treatments exaggerate the surreal beauty of the locations.

This is fantastic execution of a super-simple video concept, shot in portrait-promo style. Kito placed a few mates in a garden on a sunny day and asked them to break out some moves. One eats a sandwich; Kito finds herself in a greenhouse. It’s lovely.

Check back this weekend to see my top 10 picks in Part 2.