Get ready for your next music release with hot tips and tricks from music industry expert & host of ABC Music Talk Podcast, Alex Branson.

Over the last decade, the music industry has developed from audio-only to what’s now a visual-audio business. Every successful music release is now accompanied with some sort of visual or video. This could be in the form of album art, Soundcloud profiles, videos on YouTube and Instagram, or short-form clips like Spotify Canvas and TikTok.

I know how overwhelming this can be for musicians—especially when your skills lie in making music, not creating visuals and editing videos. It’s worth the time and effort that goes into making these assets since visuals are awesome for engaging your fans and giving context to your music.

Before Your Next Release

Before you drop any new music, you need to plan what visuals you need. It’s necessary to create multiple assets for even the most basic music campaigns. One of the record labels I work with makes 20 to 30 visual assets for each track they release! You might not want to create that many but I’ve compiled a list of the essential visuals every artist needs when releasing new music:

These are short teaser videos that include the album title and the date of your release, lasting around 15 to 30 seconds. Promo videos can be anything from a compilation of still images to a short video of the artist giving the details of their next release. These are perfect when used as pre-order announcements or album drop notifications. Check out this tutorial for making your next promo video.

There are three full length videos that I would include in every music release—traditional music videos, lyric videos and artwork videos. These are the videos you’ll want to premiere on YouTube on release day and share on social media platforms in the weeks following. The traditional music video would be considered the most time consuming, but also the most rewarding. An awesome music video can go viral, reach new fans and increase revenue—read this blog to find out how to make a music video using an online video creation app. Lyric videos are a great way to increase video plays on your YouTube channel and find out which songs are the fan favourites. Art tracks can be uploaded for every song you release—to make an artwork video all you need is your song and album artwork. The Smart Tracks that Rotor have created are a low effort and cost-effective route to success for a music creator. Don’t solely rely on them, but they can certainly fill some gaps for you. Find out all about art tracks and how to make them here.

Still with me? Good. I know the above list might feel like a dizzying amount of visuals. Really they are just a few of the asset types that you might create depending on where your audience hangs out. Each social media platform has certain specifications that work best for the intended audience. For example, a YouTube video is typically a long-form 16:9 format, whereas an Instagram story is a 15-second 9:16 (Vertical) format.

Although some of your visuals might have to be replicated for different size formats and platforms, it doesn't mean everything needs to look the same. Try to knit your visuals together so they become an extension of the journey your music is taking the listener on. The goal is to maintain a continuous engagement strategy with your audience.

Outside of organic audience engagement, it’s very common to pay for advertising. Typically, you’re either boosting an organic post to reach fans that are already engaged, but the algorithms are not pushing to a timeline, or to reach new potential fans. Finding new fans is often based on similar liked artists, genres or maybe location especially if there is an ‘in-real-life activation’ like a launch party, showcase or in-store signing. An ad creative for an album release could be a short video or animated art, informing fans that your new music is available for download.

Top Tip: I recommend making ad creatives in square and vertical formats, to share on your Instagram feed and stories.

Getting Started with Rotor Videos

Releasing a campaign can be daunting but using video creation apps like Rotor Videos can simplify the process. At Rotor, there are thousands of beautifully-filmed clips with footage commissioned exclusively for Rotor users. Although finding stock video is easy when you’re an independent artist, finding high-quality stock footage isn’t. At Rotor, we aim to make it as easy as possible for you to find the right visuals to showcase your song. 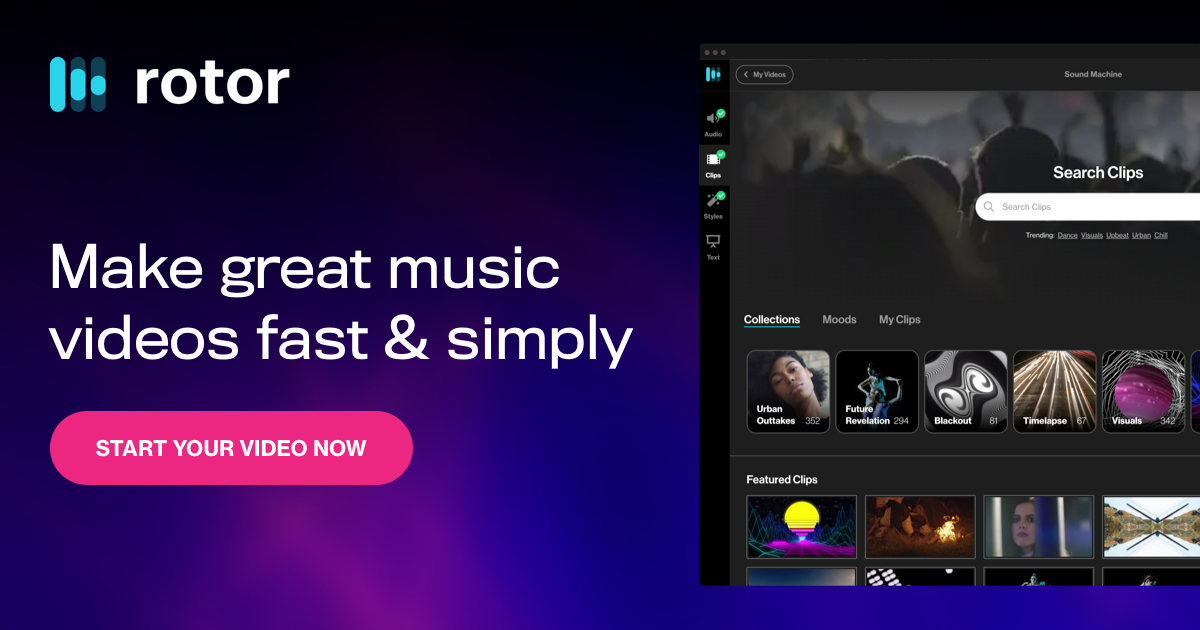